SuperLife workplace savings scheme, SuperLife managed investment scheme, and (“SuperLife”) are “PIEs”. Therefore, we deduct tax at your PIR rate from the position of the investment income that is taxable before it is added to your savings accounts. We pay the tax to the IRD.

As a general guide:

It is not as simple as the general guide suggests as there is a second test that includes your investment income from your investments that are PIEs. While this income does not form part of your taxable income it may increase your PIR.  Use the flow chart to work out your PIR.

For more details on how to work it out, refer to the PDF version of this guide.

Where do I find out what my current PIR is?

We will tell you on each of your statements what PIR rate we currently hold for you. You can also see it on the Internet if you are registered for Internet access, or you can phone us (0800 27 87 37) at any time.

When should I review my PIR?

Each year (March is a good time) you should review your PIR and tell us if it has changed.

Subject to what the law requires, we will continue to use your last advised PIR, until you tell us to use a new one. We will remind you each year to check that your PIR is correct.

What if my PIR is wrong?

If you tell us that your PIR is 17.5% when it should have been 28%, or tell us 10.5% when it should have been 17.5% or 28%, we will deduct tax at the lower rate. If it is then discovered that your PIR should be higher, the Inland Revenue Department could ask you later to pay the extra tax (plus penalties). You should complete the PIR advice form correctly and review it each year to keep it up-to-date.

Where do I get a PIR advice form?

How do I change my PIR?

To change your PIR:

What if my income changes?

If your income changes during a year, it does not affect your PIR until the next year at the earliest. Your PIR is based on your annual income in whichever of the last two years gives you the lower PIR.

Does my PIE income affect my own tax returns?

No. As long as we have your correct PIR, we will deduct the appropriate tax (either 10.5%, 17.5% or 28%) from the taxable investment income allocated to your accounts. There will be no more tax to pay and it doesn’t affect your tax return.

We have tried to explain PIRs as simply as possible. However, the tax law is complex. If you have any questions, please contact us.

From 1 April 2012, you need to include your worldwide income when determining your PIR. However, you may choose not to include your worldwide income for either or both of the income years if you reasonably expect that your taxable income in either of your first two years as a resident will be significantly lower than your total income from all sources for the previous income year(s).

Work out your “PIR Total Income”

plus your Total PIE Income. Enter your details to 31 March for last year, and the year before. 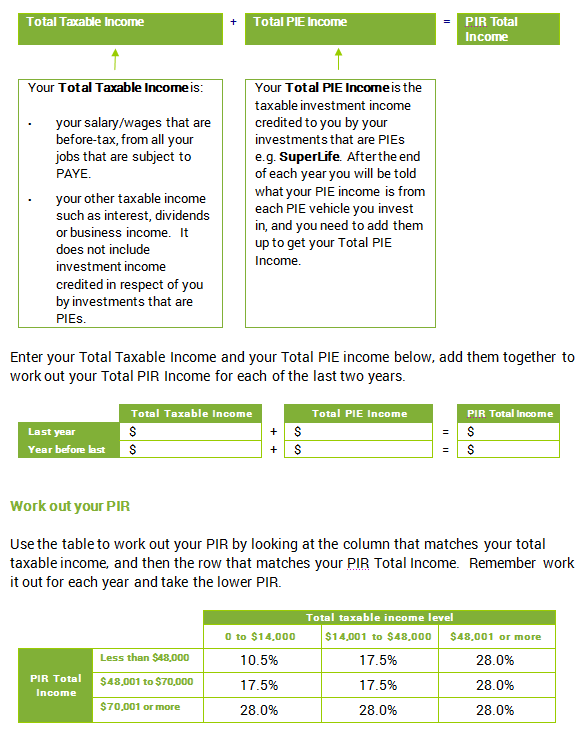 Combine your KiwiSaver with low fees and a passive investment strategy.

Why try to pick stocks when you can own the whole index? SuperLife lets you access the full range of Smartshares Exchange Traded Funds (ETFs).

How can we help?

I am looking for assistance with
I want

Click here to view the returns and fees for all of SuperLife's funds.

Click here for information on choosing your investment strategy.

Click here to view our frequently asked questions on investing.

All of SuperLife's funds can be combined in any way you choose, and changed at any time free of charge. Click here to view our sector and ETF funds.

Click here to learn about SuperLife Invest, our most flexible investments/savings scheme.

If you've been a member of KiwiSaver for 3 years you may be able to withdraw some of your KiwiSaver savings to put towards purchasing your first home. Click here to learn more.

Click here to view the returns (after fees and taxes) and fees for all of SuperLife's funds.

Click here for an overview of your options when you reach your KiwiSaver retirement age.

Click here to read our frequently asked questions on "MTCs".

There's no minimum age to join KiwiSaver. Click here to learn more about KiwiSaver for members under age 18.

We're committed to making the transfer process as simple as possible. Click here to learn more.

Transfer to a low fee KiwiSaver provider that offers the flexibility you’re used to. Click here to learn more.

SuperLife offers reduced premiums for insurance that puts you in control. Click here to learn more.

SuperLife disability insurance protects you from the loss of income from a severe disability that prevents you from working for an extended period. Click here to learn more.

SuperLife medical insurance lets you insure against part or all of your medical expenses; from doctors' visits and prescriptions, to surgery and hospital care. Click here to learn more.

Click here to learn how NZ Super works and the current rates.